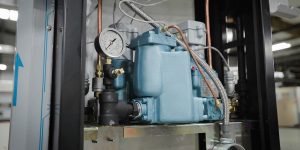 Located in Greenwood, South Carolina, Red Seal Measurement systems are specially designed to provide unsurpassed service in the most demanding measurement applications, from refined fuel custody transfer to exacting batching operations in the food and chemical industries. The company originated in New York as Thompson Meter Company and quickly changed its name to Neptune Meter Company. The business grew from water meters to petroleum meters before being divided into market segments and split between Tallassee, Alabama, and Greenwood, which opened in 1972.

The aging workforce and pending retirements in the next one to five years of a significant portion of the hourly workforce had become a concern. This threat was coupled with a protracted training and development process where new operators sometimes required a year or more to become proficient. Previously, a new hire was set up for a job, basic instructions were given, the number to produce was provided, and they were left. No one saw them through the entire process. Additionally, the job market for work ready or CNC experienced employees was, and still is, highly competitive with only a limited pool of qualified candidates. In 2017, SCMEP completed a Competitiveness Review with Red Seal Measurement which took a deep dive into the organization and addressed this concern.

After reviewing opportunities for improvement, Training Within Industry (TWI) was suggested. As new hires are on boarded, a key method for enabling effective and rapid training was through TWI. Adopting this methodology would reduce the required learning curves and total training time while providing a smooth transfer of knowledge from the seasoned workforce to new employees. A standardized protocol ensures that new employees are quickly and effectively trained in a formal, consistent manner that results in safe, productive, and quality work.

A TWI program is a foundational level training that ensured employees not only knew what they were doing but more importantly, why they were doing it. In addition to helping standardize behaviors, the TWI program significantly improves supervisor performance. To implement the program, SCMEP began by helping the management team not only understand the importance of what they were doing, but why and how. A few exercises were completed in a short period of time which helped them understand what was typically done in terms of training was ineffective. As the TWI methodology was implemented with the first few employees, management started to see some interesting things happen. The senior employees were starting to take ownership at becoming more effective in introducing the information on which they were training. In turn, the mentee gained some ownership in pursuit of high performance.

Attitudes started to shift. Employees were taking ownership of their work. Mindsets were changing. Where some employees were quite aggressive on training behaviors previously, their attitudes started to shift as they began to ensure their mentee was as successful as possible. New employees gained confidence in the tasks they were asked to perform before the supervisor left them on their own. After onboarding their first 7 new employees in year one, the company is learning how to successfully train the next generation of employees more effectively.

“The folks at SCMEP are some of the brightest people I have ever met. They have a deep understanding of the industry and do not waste our time or theirs looking at unimportant matters. The team is laser focused and able to bring valuable tool sets to us and get them implemented in very pragmatic steps. I think the world of what SCMEP is doing for this company and throughout South Carolina.” Chuck Strawn, General Manager